What is free in London? You may be surprised why i asked this question? Of course, most people think that nothing is free in London. But they are totally mistaken. Today we would like to share  some amazing information about plenty of things which are free of charge for everybody!

Yep, there are lots of free museums in London to visit for a cultural fix. Ancient art, fascinating objects, and even an 82-foot blue whale skeleton can be found in the capital’s array of museums.

Hearing about free stuff is just music to my ears. From the buskers of Oxford Circus, to the halls of the Royal Opera House, music flows freely across London.

20. Tinkle the ivories on one of London’s street pianos.

21. See a concert at St Martin-in-the-Fields.

23. Attend a lunchtime concert at the Royal Academy of Music.

24. Record your future hit at the Nando’s recording studio.

25. Catch the next big thing at Rough Trade on Brick Lane.

26. Catch one of the Royal Opera House’s free ‘Live at Lunch’ performances.

Don’t expect free Hamilton tickets, but we’ve got some pretty nifty theatrical things for you to do. Comedy, films, and a healthy amount of drama await!

27. Watch the National Theatre’s sets being made at the Sherling High Level Walkway. 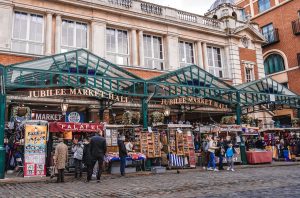 29. Take a free acting masterclass at the Theatre Royal Haymarket.

30. Spot a celeb at a film premiere at Leicester Square.

31. Laugh yourself silly with free comedy shows from Angel Comedy

32. Or chortle away at the Top Secret Comedy Club, where regulars include Jack Whitehall, Omid Djalili, and Simon Amstell.

33. Dive into the BFI’s film collection.

“There is no must in art because art is free.” It certainly is with these free art exhibitions and galleries, perfect for an eyeful of though-provoking paintings, sculptures, and installations.

34. Wander round the street art of East London.

44. Enter a world of neon dreams at Gods Own Junkyard.

49. Head along to First Thursdays, when over 150 East London galleries stay open late for free exhibitions, events, and talks on the first Thursday evening of each month.